Elephants are one of the most magnificent creatures in our natural world. And they’re also one of the most intelligent and sociable. To an elephant, family bonds are everything. With the exception of adult males, elephants live in family herds for their entire lives. These herds will be led by their ‘matriarch’ who is usually the largest and oldest female of the group. She is responsible for ensuring the survival and wellbeing of everyone in the herd.

Adult males tend move away from their family group once they reach sexual maturity. They often join small ‘bachelor’ herds. Within these herds, a similar hierarchy is formed to that of the female herd, where the older bull elephants take on the role of leader and mentor to the younger males.

Elephants form such close and intimate bonds with their family members and friends, that when one of them dies, the others in the family will literally mourn their death. For years following an elephant’s passing, their herd will revisit the place of their death, touching the bones with their trunks and lingering there reverently for some time before moving on.

Elephants live in family herds led by their ‘matriarch’.

Elephants are incredible communicators and have a huge range of different methods through which they communicate by. The most obvious of these is through sound. Most people will be able to recall the distinctive loud trumpeting calls of an elephant. In fact, they have around 70 different vocal sounds they use to send messages to others. What you won’t have heard though is their infrasound vocabulary. These are very low frequency sounds, between 1 to 20Hz, which are inaudible to humans but allow elephants to communicate over several miles, and across dense terrain such as forests.

Scientists have recently come to think that elephants also use vibrations in the ground to send signals to others. By stomping on the ground and generating low frequency rumbling, they create seismic waves which other elephants many miles away can pick up through their feet! They can use this method to send distress calls, greetings or to co-ordinate with other distant herds.

Elephants can send and receive messages using their feet.

Elephants have a very keen sense of smell, more powerful than any other mammal, including dogs! They use this super power to avoid danger, to locate food and water, and to communicate with one another. For example, a male elephant can smell when a female is in season and so know when to try and woo her!

For baby elephants, smell is especially important. When they are born, they’re eyesight is very limited, and so it is their acute sense of smell which enables them to recognise their mother, and navigate their world in those early stages.

When face to face, elephants are very tactile creatures. They use their trunks and ears to greet one another and show affection. By rubbing their ears against another elephant, or by intertwining trunks, they show re-assurance, affection and kindness. Elephants show great empathy towards their family and friends. If a member of their herd is in difficulty, the other elephants will band together to help them out. For instance, if a calf is stuck in mud, the other elephants will work together and use their tusks to gently lift the baby back to safety.

Elephants use touch to show affection and reassurance.

Just like humans, elephants have developed their own kind of sign language. They have quite a range of different gestures which they can use to show aggression, defensiveness, playfulness and affection. Some gestures are very obvious such as spreading their large ears, lifting their head and trunk high in response to a perceived threat. Others are more subtle, such as opening their eyes wider to show anger. Their tails often tell a lot about how an elephant is feeling. If they are relaxed their tail will swish from side to side. When they feel uncomfortable, their tail goes rigid and points downwards. An angry or scared elephant will stick it’s tail out horizontally. 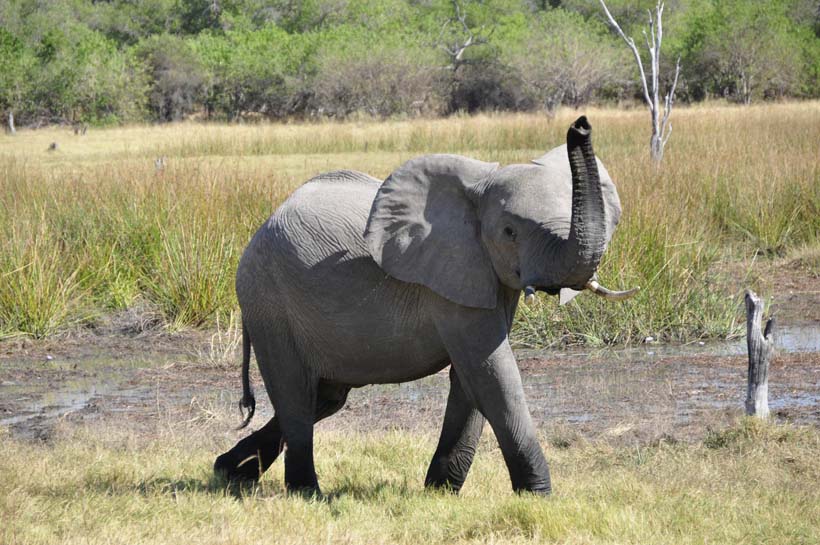 An elephant displaying body language to say it feels threatened.

Elephants demonstrate a huge amount of intelligence. They are one of the few animals on earth to be able to recognise themselves in a mirror! Their intellect enables them to problem solve by crafting and using tools. They also exhibit a superb memory, hence the saying ‘an elephant never forgets’. This is one of their key survival skills; it is thought they can recognise and remember up to 200 elephants, giving them a valuable database of friends and, more importantly, foes. They can also memorise the precise locations of food sources and watering holes amongst the vast regions of land they roam through.

Keep up to date! Subscribe to my newsletter to hear about all the latest wildlife art releases.

Gift your loved one a special portrait of their pet.