Have you ever heard of a cat that likes to party? Well now you have. Meet Boots! She’s a real one-of-a-kind feline who knows how to live life to the full.

Boots’ zest for fun probably comes from her rough beginning, and her very lucky twist of fate. As a tiny little kitten, she was abandoned, wrapped in a plastic bag. She was discovered by a kind man who rescued her and found her a loving home with his good friend Phil.

Boots and Phil developed an unbreakable bond, and a shared love of music! Whenever Phil plays a song, Boots will come running and sing her little heart out with him.

​Boots has learnt that parties provide endless fun and entertainment. Whereas most cats would scarper to a quiet den, Boots will be there at the centre of the action, lapping it all up and singing to the music. She’s even been known to sneak into visitors’ cars if they have the radio playing.

Boots and her growing family

When Boots was around 2 years old, Phil’s partner and family moved in with him, including their three cats. Initially Boots was a little protective of Phil and wasn’t all that keen on sharing attention with her new family members. However, she soon grew to love them all dearly and is the sweetest most loving companion they could wish for. She now loves to socialise as much as she can, both in and out of the family home. She can often be found visiting neighbours houses, just to check in on them and say hi. The more people she can meet the better. She’s a true social butterfly!

​Apparently Boots also has a mean streak to her (all in the name of good natured fun of course). One of her hobbies includes sitting on the stairs and swiping at peoples feet as they walk past.

​The other cats in the household adore Boots and very much treat her as the matriarch. They follow her around everywhere, and know that she’s the top cat of the hierarchy.

Commissioning a portrait of Boots

In the lead up to Christmas 2019, Phil’s step-daughter Rachel contacted me to ask if I could draw a portrait of Boots. Knowing how much Boots meant to her parents, Rachel knew it would make the perfect Christmas gift for them.

​Rachel had previously commissioned me to draw her Auntie and Uncle’s dog, Tippy, also for Christmas. When the portrait of Tippy arrived, Rachel was amazed at the finished drawing, and got straight back in touch with me to purchase a pet portrait gift voucher for her parents.

After her parents had been gifted the voucher, they sent me some lovely photos of Boots. There was one in particular that really captured her perfectly. We discussed some composition options and different background colours, and decided on a full body portrait with a warm grey background. Being a calico cat, Boots has beautiful warm colourings to the fur on her back and around her head. Most of her body is white, and so the warm grey background would contrast well against the white fur.  The warmth of the background would bring out Boots’ gorgeous orange markings too. 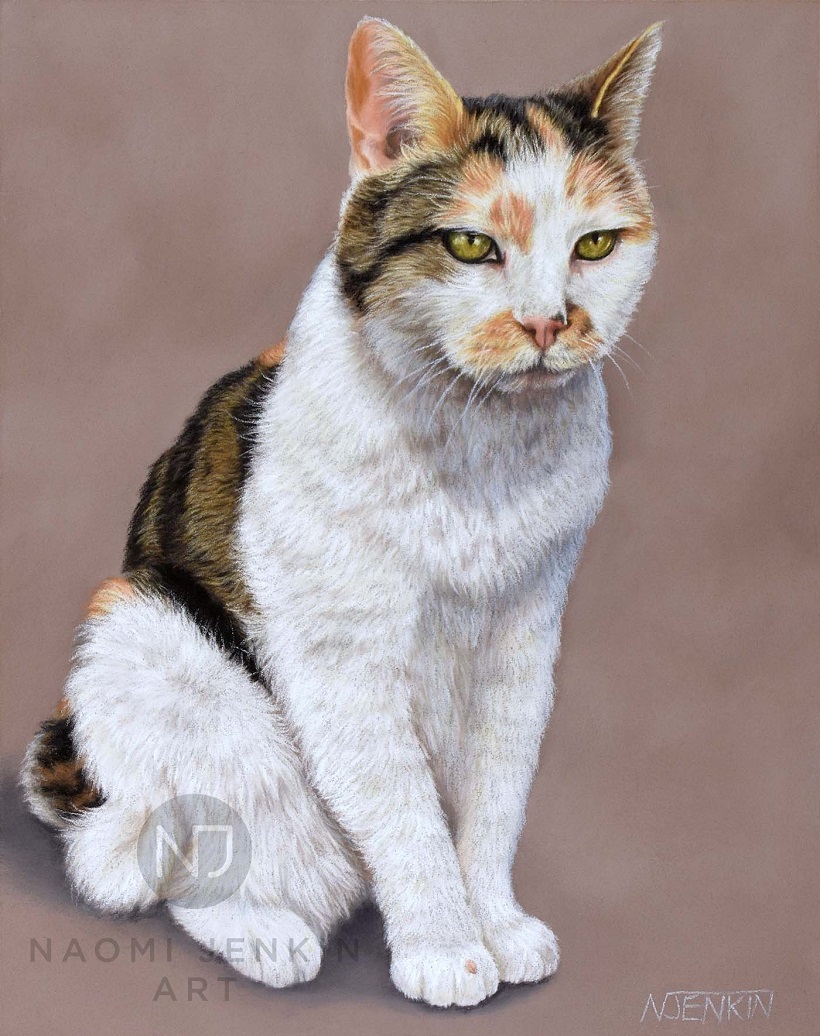 Seeing the portrait come to life

Boots has such a refined and dainty look about her. Drawing her cat portrait was a real pleasure. At various stages of the drawing, I posted up photos and videos on my Instagram and Facebook pages. Rachel and her parents were very excited to see the daily updates, and were even more thrilled when they received the finished portrait in the post. They showed the drawing to Boots, who took some time studying herself in the portrait. I’m pleased to say that it received the meow of approval! 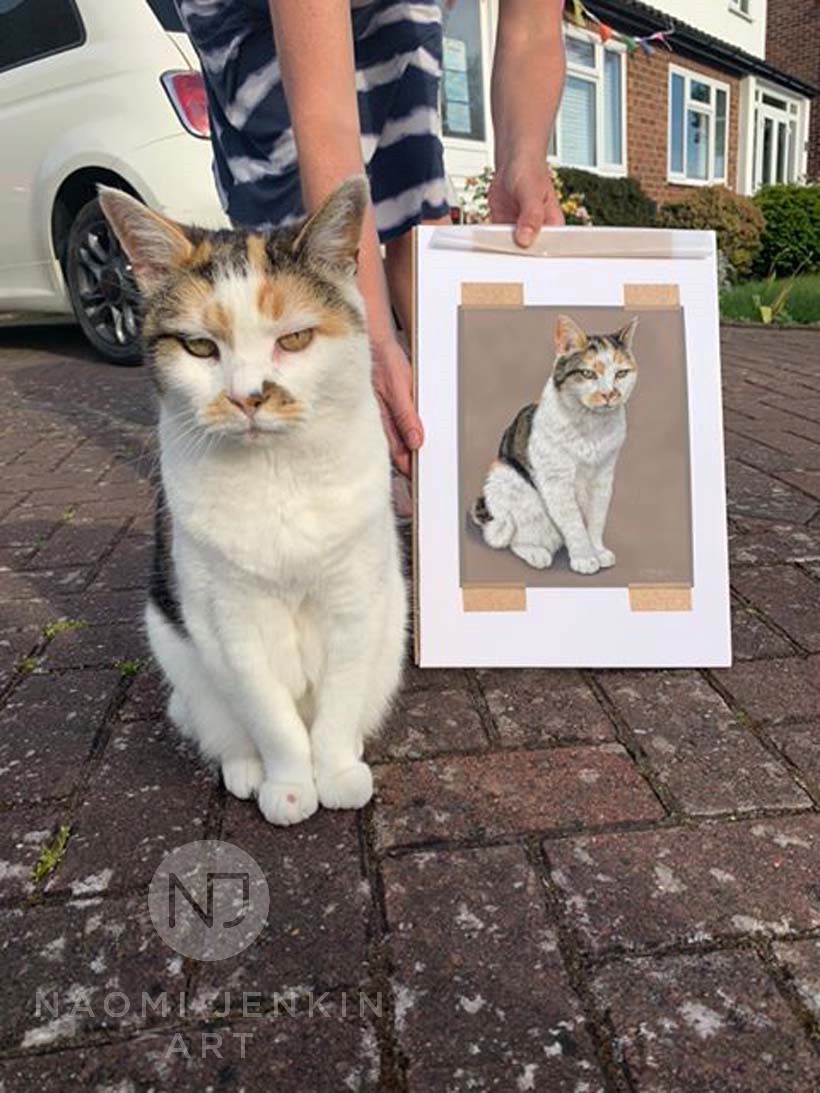 Boots with her portrait.